The Meteorological Office, abbreviated as the Met Office, is the United Kingdom’s national weather service. The Met Office issues weather reports and makes meteorological predictions across all timescales from weather forecasts to climate change. Standard measurement units are needed for the communication of temperature, air pressure, rainfall amounts, wind speed and horizontal visibility.

On 1 January 1961, the Met Office formally adopted the degree Celsius as the official unit for the measurement of temperature. This followed the adoption of the unit by the World Meteorological Organization as the standard unit of temperature measurement.

When the BBC introduced temperature symbols on their television weather forecast maps in the 1960s, the Celsius scale was used exclusively.

In 1970, recorded forecasts for the Automatic Telephone Weather Service, and the weather presentations of a number of independent television companies went over exclusively to degrees Celsius. 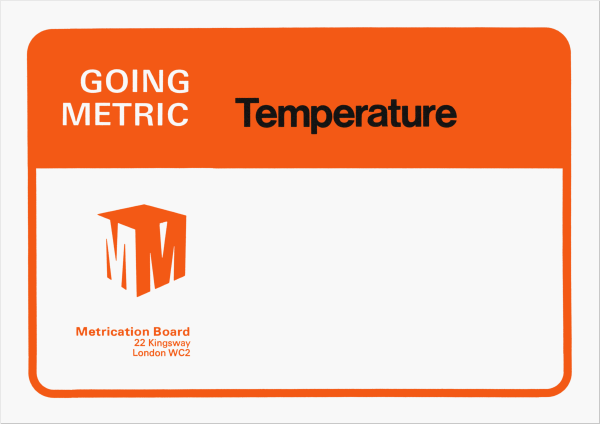 In 1913, in their Eighth Report to the Lords Commissioners of His Majesty’s Treasury, the Meteorological Committee noted that the International Commission for Scientific Aeronautics had recently proposed the use of units based upon the CGS (centimetre, gramme, second) system for the measurement of air pressure.

The absolute unit of pressure in the CGS system, the forerunner of the modern SI, is the dyne per square centimetre. A unit called the bar was equal to one megadyne per square centimetre. Subunits of the bar, the centibar and the millibar, were chosen as working units for meteorological use. The millibar is numerically equal in value to the modern SI unit the hectopascal, hPa.

At that time, the mercury inch was the unit used for the measurement of air pressure at ground level. However, in 1907, the Meteorological Office had adopted the millibar for the measurement of pressure in the upper air, and in 1911 the millibar had also been adopted for the data from the Observatories where C.G.S. units were already being used in connection with magnetism and electricity. The system had previously been approved by the Meteorological Council in 1904, and by the Gassiot Committee of the Royal Society in 1910.

Another advantage noted at the time was that the bar, was similar in value to the standard atmosphere. The equivalent of the adopted normal value at sea level equal to 1013.2 millibars.

From 1 May 1914, all air pressure data in the Meteorological Office’s Daily Weather Reports were in millibars.

In April 1913, The International Commission for Weather Telegraphy resolved to harmonise the international telegraphic code for the exchange of weather reports in Europe. The proposed new code assigned only two digits for rainfall information, instead of three as had previously been used for UK weather reports. Switching to the use of the millimetre would resolve the issue.

Prior to the adoption of the millimetre, the reading of rainfall in the UK had been carried out to hundredths, or thousandths of an inch, but the readings to the higher degree of accuracy had seldom any practical meaning. The readings using the metric system have a resolution of 0.1 millimetres, or 0.004 inches, which represents a higher practical degree of accuracy. The telegraphic code hitherto in use had provision for reporting amounts up to 10 inches, or 254 millimetres. The new telegraphic code made provision for reporting amounts up to 100 millimetres.

From 1 January 1967, the Met Office switched to reporting snow depths in centimetres. Before 1967, snow depths were reported in inches despite the fact that precipitation in the form of rainfall had been measured in millimetres since 1914.

A useful advantage of measuring snow depths in centimetres is the rule of thumb that one centimetre of average density snow, when melted, contains approximately the same amount of water as one millimetre of rainfall.

From 1 May 1914, the Meteorological Office adopted the metre per second as the unit for the measurement of wind speed. However, at the time, the Beaufort scale continued to be the main unit used for the expression of wind speed in weather reports. The metre per second was restricted to occasional reports received from anemometer stations regarding extreme wind velocities attained in gales. Such data being published on the front page of weather reports.

Summarising the reasons for the change of measurement units in 1914, the Meteorological Office includes the following in the introduction to their Daily Weather Reports, 1st January to 30th June 1914:

“One of the principle reasons for this change is that it is a step towards the adoption of a system of units which may become common to all nations.”

In 1947, the IMO Conference of Directors, held in Washington, introduced new telegraphic codes for the transmission of wind speed data in weather reports. In the new codes, the knot superseded the use of Beaufort scale numbers.

The use of the knot for wind speed measurement came into effect on 1 January 1949.

From 1 January 1967, the Met Office switched to the metric system for all references to heights and distances. This included the measurement of horizontal visibility in weather reports, which switched from yards and miles to metres and kilometres.

Rainfall has been recorded in millimetres since 1914.