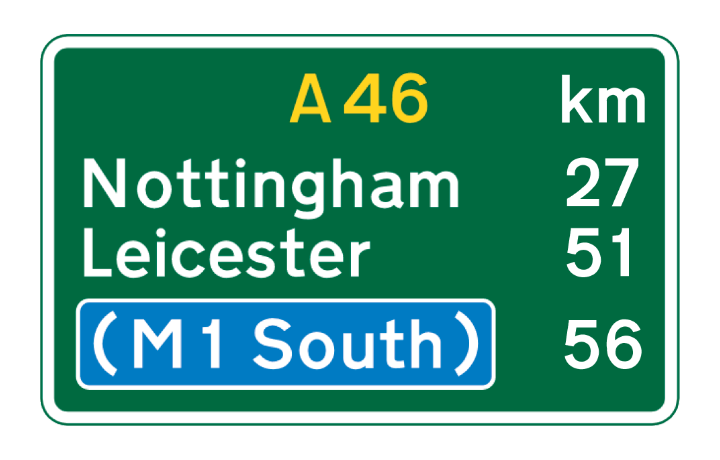 The units and abbreviations used for distances on road signs in the UK are muddled and inconsistent.

The UK is the only country in the world that uses yards on road signs. However, even within the UK itself, there is no standard symbol for ‘yard’.

In Wales, distances cannot be shown in ‘yards’ unless they are also shown in ‘llath’. Unlike imperial units, metric symbols do not require translation.

The metre is the standard unit of distance on all road signs in all other countries, apart from the USA, which uses feet and not yards.

Additionally, the size and cost of bilingual road signs can be reduced by using the symbol ‘m’, instead of ‘yards’ and ‘llath’.

Yards and fractions of a mile

Education has been metric since the early 1970s, with many schools making the switch in the late 1960s. Science lessons in schools have been metric for longer still. Considerable benefits were gained when children no longer needed to learn the long lists of conversion factors necessary for dealing with measurements in old pre-metric units.

It should therefore come as no surprise that most drivers of a working age no longer understand how imperial units relate to each other. In particular, most drivers do not know how many yards there are in a mile, or how many yards constitute the various fractions of a mile that are still used on road signs in the UK.

This was confirmed in a YouGov survey, carried out in 2013:

When asked, “How many yards are there in one mile?”,
76% of respondents were unable to give the correct answer within the 10 seconds allowed.

Yet this knowledge is crucial to understanding imperial distance signs, where yards and fractions of a mile, are used interchangeably. For example, if there is a low bridge near a road junction, this might be indicated by the following two signs:

Without knowing how many yards there are in ½ mile, it is impossible to know whether the road junction comes before or after the low bridge. Even with the necessary conversion factor, it is not straight forward. However, all drivers are expected to be able to deal with these unnecessary complications.

With metric signs, all distance values scale seemlessly, from short to long. For example, it is easy to see that 6 kilometres is ten times as far as 600 metres.

Whereas, with imperial signs, it is not immediately apparent how many miles a distance ten times as far as 600 yards would be.

Any road sign measurement system that requires conversion tables and a calculator, simply to work out the value of a distance that is ten times further than that of another one, is clearly unfit for purpose.

On imperial road signs, the numerals used in fractions are always smaller than those for whole numbers. This means that for a given text height, fractions are less legible at a distance. Metrication will bring an end to the use of vulgar fractions on road signs, and thus will increase their legibility. The inconsistent mixture of yards and fractions of a mile will also end.

An added bonus, that will aid the switch from yards to metres, is that the metre and the yard are similar in length. The difference in size being less than 10%. This means that some signs that use yards could be upgraded cheaply by applying an “m” symbol, in the form of a vinyl overlay, over the word “yards” or “yds”.

Some signs are already actually in metres but are just showing the word “yard” in place of “m”. This is possible due to the tolerances permitted when measuring distances to be shown on signs. This is especially useful for road engineers who work in metres.

For example, the positioning of temporary signs at roadworks is specified in metres, even though the distances on the signs themselves are shown as yards. e.g. a sign indicating 200 yards is positioned 200 metres from the hazard. 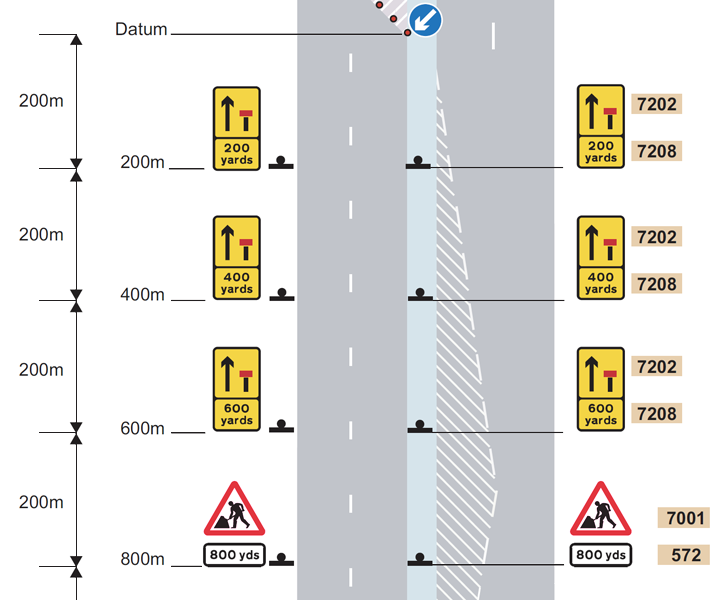 Metrication will allow signs to show the same units that people actually use in their work.

The dimensions of road markings, and the distances between them, are specified in metric units.

The odometers currently fitted to most vehicles in the UK record distances in decimal miles. Total distance travelled, and trip distances, are shown in miles to one decimal place. The least significant digit on the display increments once for every 176 yards (161 metres) travelled. This means that it is not practical to use an odometer to measure out road sign distances when they are shown in yards.

For example, for a sign indicating that a junction is 500 yards ahead, the odometer display will have incremented by 2 tenths by the time the vehicle reaches the junction (500 yards being equal to 0.284 miles).

When road signs go metric, drivers of new vehicles will benefit from metric odometers. The least significant digit of a metric odometer increments once for every 100 metres travelled. This makes them ideal for measuring out all distances shown on standard metric road signs, whether they are long or short.

For example, for a sign indicating that a junction is 500 metres ahead, the odometer display will have incremented by 5 tenths by the time the vehicle reaches the junction (500 m being equal to 0.5 km).

Metrication will mean that odometers will finally be 100% compatible with the distance units on road signs.

Incorrect usage of the “m” symbol

In contrast to metric units, imperial units, like the mile and the yard, do not have standard internationally recognised symbols. However, the Traffic Signs Regulations and General Directions (TSRGD) does prescribe abbreviations that can be used for these units on road signs. Unfortunately, the abbreviation chosen for “mile” is “m”.

The UK is probably the only country in the world that chooses to use the “m” symbol to mean something other than “metres” on road signs. This practice is confusing and clashes with legally installed signs on private land that use the “m” symbol correctly to signify “metres”.

Such muddled official use of the “m” symbol does not set a good example to our children, and must give a poor impression of the UK to visitors from abroad.

The “m” symbol is the international standard symbol for “metre”. Its use on road signs should be reserved exclusively for this purpose.

If the issue is not resolved before metrication, switching all signs from miles (m) to kilometres (km) will end the confusion.

In the UK, the extent of a hazard is indicated in yards, miles, or fractions of a mile, preceded by the word ‘For’.

The 1968 Vienna Convention on Road Signs and Signals prescribes the use of ‘up arrows’ to indicate the extent of a hazard.

In Wales, on bilingual signs, the extent of a hazard is also indicated in Welsh, in yards, miles, or fractions of a mile, preceded by the word ‘Am’.

The UK is a signatory country to the 1968 Vienna Convention on Road Signs and Signals.

The Convention prescribes the use of ‘up arrow’ symbols (diagram H, 2, of Annex 3) to indicate the extent of a hazard, or the length of the zone to which a regulation applies. These symbols are well-understood internationally.

The metrication of UK road signs will present an ideal opportunity to also upgrade to the use of ‘up arrow’ symbols. All hazard extent road signs in the UK could become language independent, with improved clarity, as a cost-free bonus of metrication.

Metrication will improve clarity and understanding, and reduce clutter on signage.

Most signs showing long distances, such as distances to upcoming towns on a route, can be upgraded to metric units at low cost using vinyl overlays. Distances in miles can be overlaid with distances in kilometres. When a sign is upgraded, an additional “km” overlay would be added to the sign, to make it clear that all distances on it were now in kilometres.

If there is no room for a “km” vinyl overlay, a temporary “km” supplementary plate could be attached to the top or the base of the sign. Once the metrication programme is complete, and all mile signs have been replaced with kilometres, any supplementary “km” plates would then be removed at a time when it was convenient to do so.

All subsequently installed new distance signs would no longer require a “km” symbol.

Ideally, the metrication programme for distance signs would commence immediately after the switch to km/h speed limits. The programme would need to be nationally coordinated, but could take place over a period of months or years to maximise cost effectiveness.

Set your car’s satnav to metric. Familiarise yourself with distances in kilometres, and observe the seemless change from decimal kilometres to metres. Compare this with the clunky switch from miles to yards, if your satnav is set to imperial.

The distances shown in “yards” on the yellow temporary signs at roadworks are actually metres.