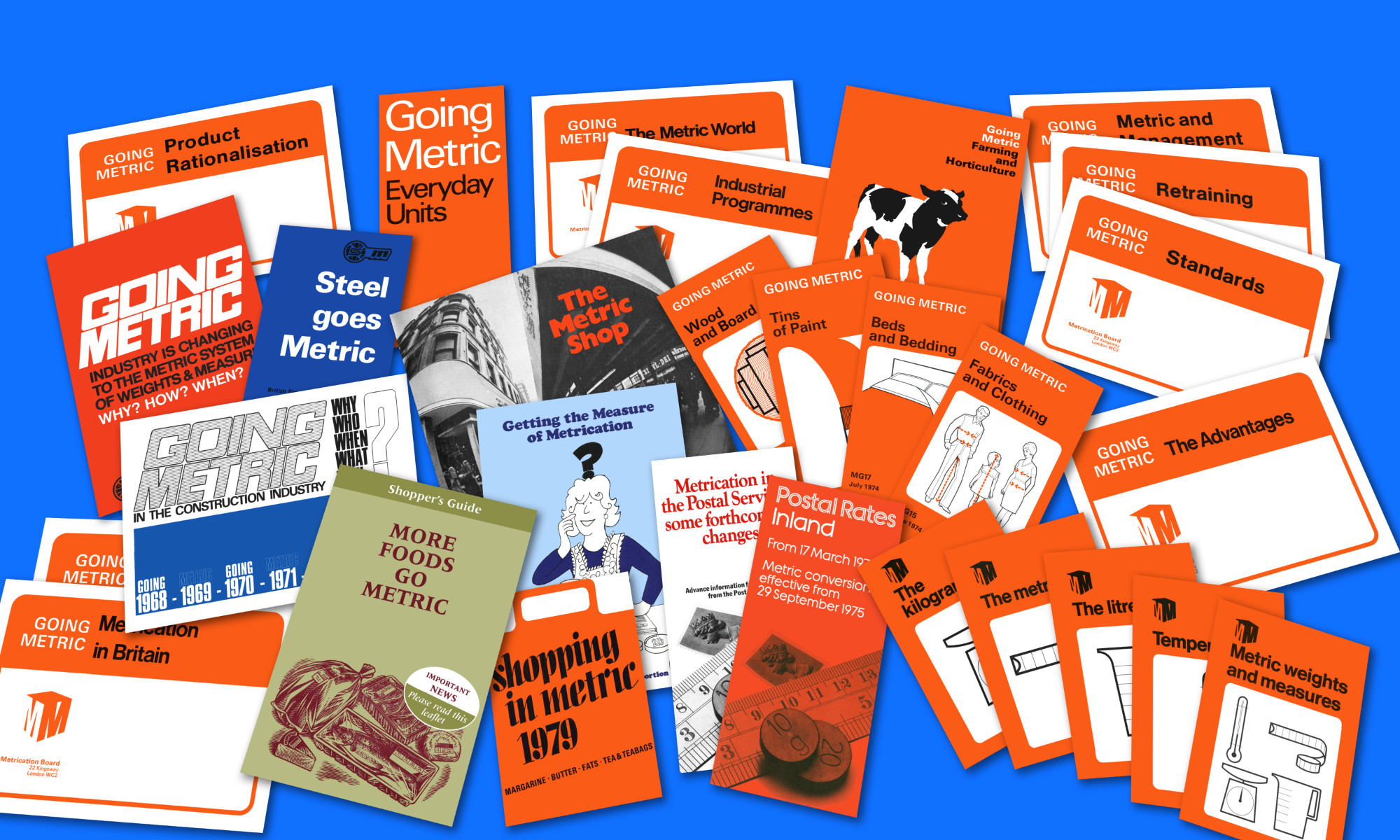 Since the industrial revolution, the UK has been a leading country in technological progress. The average standard of living has improved markedly in the last two hundred years as a result. People have come to expect improvement, and not only have they grown to accept change, they actively seek out the latest innovations in consumer gadgets, and the latest upgrades of software applications.

However, the UK’s political institutions have not reflected the peoples’ eagerness for improvement when it comes to measurement units. Essentially, it has taken more than 200 years for Parliament to upgrade the country’s most fundamental technology – its system of weights and measures, and the process has still not been completed.

Metrication in the UK has been a very sporadic process. Some sectors have been fully metric for decades, whilst others such as road signage, have barely begun.

Examples of the current status of metrication

In 1895, a Select Committee of the House of Commons took exhaustive evidence on the subject of adopting the metric system. Their Report, made three key recommendations:

In 1896, following an extensive debate, the House of Commons voted unanimously to legalise the use of metric for all purposes.

In 1904, Lord Kelvin led a campaign for metrication and collected 8 million signatures of British subjects, and the House of Lords voted unanimously to make metric compulsory after two years.

Throughout the 19th and early 20th centuries, the UK played an important role in the development of the metric system. Its modern iteration, the International System of Units, or SI, has six units named in honour of British scientists.

In 1950, the Hodgson Committee on Weights and Measures, which was set up to review legislation, unanimously recommended compulsory metrication and currency decimalisation within ten years. Their report said:

“The real problem facing Great Britain is not whether to adhere either to the imperial or to the metric system, but whether to maintain two legal systems or to abolish the imperial.”

On 1 January 1961, the Met Office formally adopted the degree Celsius as the official unit for the measurement of temperature. This followed the adoption of the unit by the World Meteorological Organization as the standard unit of temperature measurement.

In 1963, the British Standards Institution (BSI), after consulting with British industry, came down firmly in favour of starting the change. The then Federation of British Industries wrote to the Government saying that the vast majority of their members, both in the number of firms and in the total size of their businesses, was in favour of adopting the metric system as the primary, and later as the only, method of measurement to be used in Britain. In 1965, the Government accepted that recommendation.

On 24 May 1965, the Government announced its intention that, within 10 years, the greater part of the country’s industry should have changed to the metric system.

In May 1967, at a tripartite meeting between the UK, France and West Germany, it was agreed to phase out the use of the calorie, the thermie and the frigorie, in favour of the joule. The BSI also sought to phase out the international use of the kilogram-force in favour of the newton. In 1971, these objectives were accepted by the European Community, and included in a new European Community Directive on Measurement Units.

On 26 July 1968, the Government accepted the recommendation that a Metrication Board should be set up as soon as possible, and affirmed that the target date for the completion of the metrication programme across all sectors would be the end of 1975.

On 5 March 1969, the Government announced that speed limits would go metric in 1973. Speed limits on road signs would switch from miles per hour (mph) to kilometres per hour (km/h). However, on 9 December 1970, the new Government postponed the switchover date indefinitely.

In November 1970, shortly after the election of the new Government, the Secretary of State for Trade and Industry stated that no new legislation would be made regarding metrication until the Government had set out its policy in a forthcoming White Paper on Metrication.

On 22 December 1970, an agreement was reached with the EEC that, following its forthcoming accession to the EEC in 1973, the UK could continue to use non-metric units for legal purposes until the end of 1979. This allowed the UK to proceed at its own pace, and gave plenty of time to set its own schedule for the completion of metrication.

In February 1972, the Government published its White Paper on Metrication. This initiated a metrication programme in the food sector. Beginning with metric packaging in 1973, the programme was set to complete in 1978, but important legislation was delayed which meant that food was not fully metric until 2000.

In 1974, metric units were added to size labelling on clothing.

In February 1975, retailers of fabrics and carpets began selling in metric units on a voluntary basis. In the case of carpets, this initiative eventually failed when one large retailer reverted to imperial pricing – something that follow-up legislation could have prevented.

From July 1975, over a period of 18 months, agriculture and horticulture switched to metric.

On 29 September 1975, the Post Office switched to metric scales and metric units for all postal tariffs.

On 14 November 1979, the new Government announced the abolition of the Metrication Board. The Minister for Consumer Affairs, Sally Oppenheim, wanted all further metrication to be on a purely voluntary basis. The consequence was that progress on metrication ground to a virtual halt in the middle of what should have been a short transition phase. The situation with food in particular forced consumers to deal with a dual unit muddle for 20 years.

In 1994, legislation was finally introduced to complete the switch to metric units for almost all economic, public health, public safety and administrative purposes.

From 1 October 1995, all remaining imperial units ceased to be authorised, except for a few specific uses including the pound and ounce for goods for sale loose from bulk, the pint for draught beer and doorstep milk deliveries, and imperial units for speed and distance on road signs. Foods pre-packed in variable weights such as cheese and meat, were now required to be sold in metric units.

On 1 January 2000, all goods sold loose from bulk were required to be weighed and sold in metric units – ounces and pounds were no longer authorised, but could be used as optional supplementary indications.

A necessary element of metrication is the withdrawal of the legal authorisation of non-metric units. The reduction in the number of legally authorised measurement units began well before the 1960s, when metrication began in earnest.

Withdrawal of authorisation of imperial units

* These imperial units remained authorised for the following specific uses until the end of 1999:

Additionally, the acre remained authorised for use for land registration until the end of 2009.

† These imperial units remain authorised to this day for the following specific uses only:

Clearly, much progress has been made, especially where national programmes have been able to be coordinated centrally by the likes of the Metrication Board. For many years, for most practical purposes, it has been accurate to describe the UK as a metric country. However, the few tasks that still remain for the UK to complete its switch to metric units for all official purposes are highly visible, and prevent the full benefits of having a single rational measurement system of measurement for all official purpose. In particular, the use of imperial road signs in a metric country is always difficult to explain to visitors from abroad, and contradicts the notion of a Global Britain.

What needs to be done?

Before metrication can be completed, politicians and civil servants need to recognise that there is a problem. The current muddled official use of measurement units has remained unchanged for so long now that many people accept it is normal. Only when the existence of the problem is acknowledged, will it be possible for it to be resolved.

The following is a short list of tasks that any government would need to carry out for the UK to complete its switch to the use of metric units for all economic, public health, public safety and administrative purposes:

In 1668, the Royal Society published an essay by Bishop John Wilkins, which proposed a universal decimal system of measurement.

John Wilkins’ proposals included most of the core elements of what would become the metric system over a century later.